If you want a refreshing, and cleansing, good for you drink, try this traditional Mexican “agua de fruta” (fruit water.)

In a blender blend the parsley with 1\2 quart water and add it to the rest of the water in a 1/2 gallon pitcher. Blend the cucumber with some of the parsley water in the pitcher, strain through a colander into the pitcher. Do the same with the pineapple. Squeeze the lime(s) and add to green water. Stir well and serve. If you prefer a little sweeter, add a little sugar or mix with lemonade instead of water.

Best fresh, but drink within 24 hours.

Actually you can follow this procedure for most any juice drink. Just blend the fruit down to pulp, strain, and add to water. Sweeten to taste. Good combinations are papaya, orange and lime, guava and lime, watermelon, cantaloupe and lime or your favorite combination. The idea is to add to water to make the juice go farther and make it more refreshing by reducing the sugar content (and calories.)

* Ingredients are not exact, start with approximately equal parts of parsley, cucumber and pineapple, then adjust to your taste.

The word of the day is “queso.” Cheese in English.

In Mexico they only have a few kinds of cheese and except for queso Oaxaca (Mexican string cheese) they are all pretty much the same, only varying in ripeness (aging) and, thus, firmness and stronger flavor. The way I, a gringo, see it is that they have the kind that crumbles, the hard kind either grated or whole, and Oaxaca. Little do I know!

Once a week, a friend of mine who lives in Buena Vista, a small town near Taxco, comes to town bearing handmade cheese that everyone says is “the best.” I decided to get some for the house and was asked what kind I wanted. I knew I wanted Oaxaca (for quesadillas or just eating) and I wanted the kind that crumbles to put on tacos, tostadas, etc. so that is what I asked for.

My friend was apparently confused by my using the word crumbles (and I found out later, that he asked another American what I meant by that) and by text he replied, “Sorry I’m not sure which is the second one. What do you want to do with it? I know you want to eat it but how??”

I, thinking this is a simple request (after all, they only have 4 kinds of cheese), answered, “For tacos and such.”

Still confused about “what kind” of cheese I wanted, he told me he would send a message in Spanish and would I please show it to Irma and have her respond. But Irma, not having her “lentes” (glasses), could not read the message, so I handed my phone to her grandson to read and reply in Spanish.

A very lively conversation discussing cheese names ensued between them. I imagine, she just buys it, like I do, hard, soft or crumbly, from the cheese stalls in the “mercado” (market.) Finally, they settled on a couple kinds by name (manchego or criollo), then changed their minds and asked for cotija or criollo.

Thinking we had settled on the quantity and kind of cheese, I headed up to my room on the fourth floor. About the time I was taking off my shoes, I received another message. My friend wanted to know if they wanted “suave” (soft) or “seko” (hard) and told me that one kind came both ways and the other only came “seko.” So down the stairs I went to ask an “otro pregunta” (another question.)

Criollo seko being decided upon, my friend acknowledged the choice with a “Sorry now.”

This sent me into peals of laughter. He was not the one to take 20 minutes to figure out what kind of cheese we wanted, nor was it his confusion to be sorry for. After saying so, I replied facetiously, “You only have a few kinds of cheese, how hard can it be?”

To which he replied, “Just a little hard. Don’t worry,” which had me laughing even harder.

I explained that, “In Wisconsin, we have hundreds of kinds of cheese to choose from. This is too funny!”

To be fair, the Mexican food guru at Epicurious says there are seven kinds of Mexican cheese. The kinds I know are:

Queso Fresco (Fresh cheese): Aged only a few days, it is soft and crumbly and can be used like feta. (I think this may be the kind I was thinking of.) I have since learned that cheese here is made from raw milk and because this cheese is not aged very long, it can possibly carry a bacteria that can make you sick. You should definitely cook it.

Queso Cotija: A hard cheese that is sold in rounds or grated from large blocks. The unique thing about this cheese is that it does not melt, it only softens, making it perfect for Chile con Queso – where you brown the cheese on a griddle, then serve it in chile verde sauce like soup. Yummy. The browned cheese is delicious all by itself too.

Queso Criollo: Is a local cheese made only here in the state of Guerrero. It appears, by its use, to be similar in nature to Cotija. Better to crumble this kind than Fresco.

Queso de Oaxaca:
My favorite, because we have nothing like it in the States, comes in broad strands that resemble string cheese, only softer. It’s unique texture comes from stretching the cheese as it is made. Pull it apart and put it on beans, tostadas, or soups, or because it melts wonderfully, in quesadillas. I will often buy a few pesos worth for an easy snack on the go. 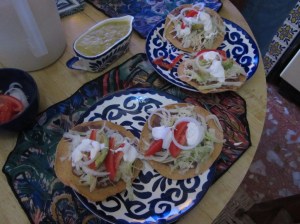 And then of course there is that other dairy product — crema, a thick fresh or slightly sour cream (like the French creme fraiche) that is dolloped on tacos, tostadas, and in soups.

In a prior post, I promised to provide the recipe for my Jamaican jerk chicken.

First I must declare that I cook by taste, so all recipes are approximate. Also the original recipe called for fresh ingredients mixed into a paste, I have substituted dry to make it easier for you, though I use fresh whenever possible.

Feel free to experiment and find the perfect “flavorful” for you.

Mix together and store in an airtight glass bottle until time to use.

To prepare jerk chicken: Wash and dry chicken thighs (the whole chicken may be used but dark meat is more compatible with the spice mix.) Rub with a little olive oil and spice mix (it is flavorful, not spicy hot, so feel free to be generous.)

Saute an onion (sliced in thin slivers) in a little oil (I prefer olive). When it starts to turn translucent, stir in several large cloves of garlic (chopped or crushed). Cook and stir for a minute or so (be careful garlic does not burn). Add chicken, sear on first side and turn. Add a teaspoon or so (a little goes a long way) of umboeshi plum vinegar* (available in the oriental section) and brown. Add a little water to create a sauce, cover and let cook until chicken is tender, adding water to keep sauce from burning. (Taste and add more jerk seasoning if you like.)

When chicken is fork tender, remove cover and let sauce thicken to consistency of a glaze.

For large groups, you can bake in 350 degree oven for an hour or so. Add additional liquid to keep chicken from drying out.

*Umboeshi plum vinegar is actually the brine left over from pickling umboeshi plums (a small, tart oriental fruit.) To substitute, you need something tart (I used tamarinds, soaked them and made a paste) and something a little sweet to balance the tart (I used prunes and cranberry juice for more liquid.) Salt to taste.

Serve your jerk chicken with:

Tropical Rice: Cook rice per instructions; if using canned pineapple, substitute juice for part of cooking liquid. Add 1 onion (I like red onions for color) and a clove or two of garlic (chopped) to the rice while cooking. When rice is almost done, add pineapple tidbits, green pepper (chopped) and 2 cups cooked black beans (add a few Tbsp bean liquid, if desired, for more protein.)

Fried plantains make a nice side or desert. Just slice and fry on medium heat until browned on both sides. Plantains will suck up oil: use just enough to keep from sticking; if using a non-stick surface this could mean just wiping the pan with a little oil.

I may not be able to sip hot chocolate at the chocolateria in San Miguel de Allende today but I can satisfy my chocolate cravings with this fabulous low-carb, gluten free brownie recipe courtesy of Bob and Kathy in Cuernavaca. Careful, they are addictive!