The person who guessed it was a tree with the bark shaved off wins the prize. Though she is the only one who made a guess. So she wins by default – not that there is anything to win really. Other than recognition here.

The odd object pictured in Tuesday’s blog is a “mula” (a mule.) Or that is what it is supposed to be. I think it looks more like an anteater with horns. 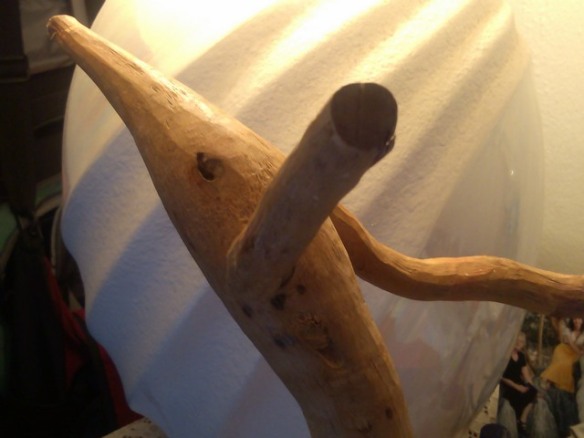 Mula is short for muleta. Muleta, means cane or crutch, and due to the word association, they often carve the handles into mule shapes. Thus a mula. This one is definitely a crude, folk art rendition.

So why do I have a picture of the head of a cane on my blog? Welllllllll….

Spring has come to Taxco. Mid-day it is hot (for me), in the mid-80s, and much more humid than it has been. I fell victim to the fate of most foreigners at one time or another, I got overheated. But let me tell you the rest of the story.

I was just getting over a severe chemical sensitivity reaction, caused by the bus company now adding fragrance to their air handling vents. I had been dizzy for 4 days but by Saturday night felt OK. So Sunday morning I travelled to a small town about 10 miles west of town for a meeting. Afterwards, my friend, Lili, and I were going to a welcome back party for our friend, Vanessa, about 10 miles outside Taxco in the opposite direction. Another friend asked if she could some with us and since she did not know where the gathering was would we wait for her? I said, sure, no problem but that was before I thought about the fact that she is Mexican.

Now nothing against the Mexican people. I LOVE the Mexican people. They are warm, loving, family oriented and many other good things. One thing they are not, usually, is timely. For example, if you make an appointment, it is perfectly acceptable to be 20 minutes late, or not show up at all. It is just the way it is with most people. (It is that way in Hawaii and other parts of the States too, so it is not solely a Mexican attitude.

Back to my story.

So we waited while she cleaned the bathroom. Now I am not sure how she cleaned the bathroom but since it took “forever” I suspect it might have been with a toothbrush. Finally she appeared and I thought we were ready to go. Noooooooo. She had to take a blind woman home, on a combi going in the opposite direction we were headed, so we waited some more. While we were waiting, everyone else left the meeting hall and we were left standing on the side of the road , with only the skimpiest of shade in the hottest part of a very humid day. Sweating, I finally sat down on a rock about 6 inches high, and wished for water, which I always have in my bag, but not today.

Eventually, our friend returned with the combi going in the right direction and we got on. Inside was like an oven, hotter than outside but at least when it moved there was air, hot air, rushing past. Eventually the heat and the constant back and forth, back and forth as we wove up the mountain to Taxco had me feeling queasy. I told myself we will be there soon and I can get some water at a tienda (a shop) and the queasiness will go away.

When the combi pulled up to the last stop, we were not by the bus station as I had expected and there were no tiendas in sight. Not only that but there was a taxi driver protest going on so no taxis and no combis were running in town either. We had to walk a few blocks. Dutifully I put one step in front of the other looking for water and a shady place to sit down. Another friend, on the corner said, “Hello.” I said “Hello” back and muttered, “I’m going to go sit in the shade over there.” which I am pretty sure she did not understand since she does not speak English. And without stopping, I headed for an iron gate behind which were some cool looking marble steps.

I remember reaching out for the gate but the next thing I was aware of was lying on the ground with my friends calling my name, waving my hat over my face, and slapping alcohol on my neck and chest while a police officer looked on, shouting something in Spanish. I had passed out in the street, from the sun, the heat, and a lack of water.

Someone brought a chair and answered my request for water, then more water. I was starting to feel better when the ambulance arrived. Oh no…..I have been in foreign countries before when an ambulance showed up and  it is not often a good thing.

Visions of some B-movie dark comedy — with a slow motion, spin through a hospital emergency room,  where not only do you not understand a word, but you cannot speak, and  every thing seems to be going wrong — flashed through my head. In the brief moment it took them to get out of their vehicle and be at my side, all kinds of horrors caused by communication issues and cultural differences rushed through my mind. I might as well be abducted onto an alien spaceship!

But all those thoughts were just a figment of an over active imagination. In reality, EMTs in Mexico are the same professional medical technicians as they are almost anywhere.  All they did was check my vital signs and finding everything normal, sent someone for a sports (electrolytes) drink, made me drink half of it, told me to go home take a cool shower and rest (all very reasonable.Unlike the US they are not required to transport when they are called. “Whew!”

As they packed up their gear and left  I asked if I owed them anything (hoping I had enough Mexican money in my bag.) The response, “gratis,”   no charge. Wow!!! For a foreigner (even someone from outside the city) just showing up would have cost a couple thousand dollars in the States!

I was free to go, but then we faced the question of “Now what do I do.”. The taxis and combis in town were not running; the only way I can get home and rest is to walk several miles in the hot, humid, sunshine. Not reasonable. So I decided the only sensible option was to continue on to the party! At least there would be food, water, and lots of people to watch over me. So we walked on  to the out of town combi station, a couple blocks away, no problem.

At the party, I was very aware of not exerting myself, so I sat on a chair, ate a little, drank a lot of water, along with some fruit punch, talked with a few people, and watched the festivities. A few hours later, I got up to head to the bathroom and I could barely walk. I figured that when I passed out, my legs folded underneath me and no matter how slowly I set myself down the weight of my entire body landed on my leg. Now my knee was complaining. By the time I had taken a half dozen steps, it loosened up and I got there just fine. So I went back and enjoyed the party.

As time went by, my knee got worse – it throbbed and started to swell, and I could not walk without assistance. I wanted to go home but how? I couldn’t walk up the hill to the combi stop and even if I made it that far, how would I get off and home when I arrived in Taxco. I certainly didn’t want to ruin the party for Vanessa, but of course that is exactly what happened.

The ever vigilant “mom” that she is (to everybody) found someone to take “us” home; she would not hear of not going; she wanted to make sure I was comfortably settled. But wait, someone came up and insisted I let their mother, “who does manipulations” take a look at my knee. Preferring a natural approach, I agreed. Anything to make this better sooner.

I am not sure what the credentials of this woman were, all I know is she knew her anatomy. It seemed that the muscles in my leg had gone into shock as a reaction to the fall, hours earlier, and had tensed up tightly and in the process, dislocated both my ankle and my knee. She pulled and pushed, smoothed and squeezed and eventually declared me fit to go home IF I would stay off it, and if possible, use a cane for the next couple days.

That is where the mula  comes in.

The next night, after 24 hours of hobbling back and forth to the bathroom using a collection of chairs as support, Vanessa showed up with this strange looking thing that I at first though was a sweet potato on a stick. By then, thanks to the treatment, hot saltwater compresses, and arnica, both topically and orally, the pain and swelling was mostly gone, and I could bear weight with only mild discomfort. Yet, she went out of her way to find it, and bring it to me, and reminded me that the therapist said to stay off it for 48 hours. OK, I will give it a try. But, I have no intention of taking it on the street with me. Sorry Vane. (If I really needed one, I would have.)

The following day, I declared myself able to walk. The swelling was gone, I managed the stairs to the ground floor without pain, and there is very little evidence of the original injury. My how we are marvelously made!

No one ever plans to have a medical emergency in a foreign land, however if I had to have one, I could not have been surrounded by better friends who treated me like family.

You know who you are. Muchas gracias!

And for those of you who might worry that I am all alone in this strange speaking land, never fear, I have papers on my person with local contacts and a durable power of attorney for health care in the local language to speak for my wishes if I cannot speak for myself. Things all foreign travelers should carry along with prescription medicines, eyeglass prescriptions, and  anything else necessary for your health and well being in a foreign country. I am well taken care of here; may you be also. For some ideas on what to pack for a stress free trip, see this article by my old friend Shelley Peterman Schwarz.