Mexico City is almost beyond comprehension to this humble Mid-westerner. The sheer enormity of a city boasting 28 million people is evident in the constant traffic — lanes and lanes and unofficial lanes wide, horns honking, and people scurrying everywhere. Metro (subway) cars packed like sardines; doors close on shoulders and fannies that didn’t quite squeeze in fast or far enough.

My hosts, Dr. Claudio and Caro Serrano, took me to the central city to “The Castle,” originally built, in the European style, for the Emperor Maximillian, one of the Hapsburgs, who had been governor of Milan, Vienna, and France  (if I read it right) before this post (their family motto was something like “we rule the world.”) 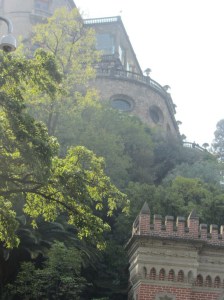 Rising above the city on a steep, rocky hill, thick stone walls accented by grand balconies and watchful turrets kept an eye on the emperor’s  empire stretching out below. Much of the grounds now is a forest preserve with an artificial lake, zoo, and several other museums  (think Chicago museum campus). They call the area “the lung” of the city for the oxygen the trees provide to try to offset the air pollution.

The building is 1700’s  European spectacular  filled with mementos of the Emperor and Empress – gold buttons, watches, and jewelry, fine china, crystal, jewels, and opulent rooms decked out in the most fashionable European furnishings of the day — mostly Louis the XV and XVI France (Limoges  floor length clock and candlestands stood out as exceptional) as was the ornate Italian made carriage. 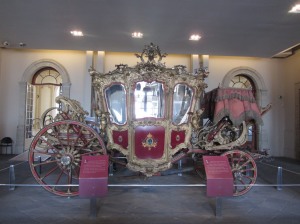 Can you imagine what it cost to ship this here?

After the Emperor went back to France, it was a millitary college that fought off a US invasion (of the fames Heroes de Ninos fame), a territorial governor lived here and ruled for 30 years until he was run out (and escaped to France) because of his love for all things French that drained the coffers, and finally the house of the Presidente who rattled around in it for awhile and then gifted it to the people of Mexico for an historical museum but still uses it for official functions for ambassadors and such. 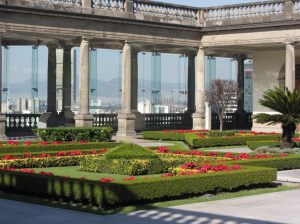 The rooftop garden, surrounding the old observatory tower is impressive, as is the long stained glass lined corridor and the view of the courtyard and from the courtyard overlooking the city. 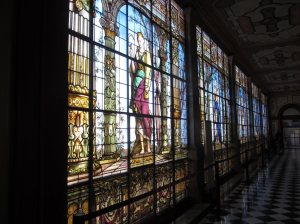