I am not sure about the Southern Hemisphere (having never been there, yet anyway) but in the north, it seems that the closer you get to the equator the more laid back (or lax) the matter of time is. Now since I am an up north, Midwesterner, we pride ourselves on being punctual. If we say we will be somewhere at 10 am, we will likely be there at 10 minutes to 10 or maybe earlier. This is just not the case in Mexico.

I have commented before about how you make plans with someone and it is considered well within social norms to be 20 minutes late, which is a bit annoying, or to not show up at all, which to me is inexcusable without at least a phone call. This is not a trait exclusive to Mexico, however, as I have experienced a similar lackadaisical attitude in the southern states and my cousin used to comment about giving programs in Hawaii where 5 people might be there at the beginning but a full house by the end.

But yesterday I received a real lesson in “Mexican time.”

I was invited to una boda (a wedding) that was to start at 1 pm. Running a little late from a previous appointment, I rushed home  to find my companion, who was supposed to be ready at noon, in the shower at 12:30. Finally ready at 12:45, we hurried out the door, waited and waited for a combi going to the right town, and finally arrived about 15 minutes late.

It was really quiet as we approached the outdoor venue, and I assumed the ceremony had already started. Imagine my surprise when we came around the corner and the only people there were the DJ setting up the sound system, a hot, sweaty groom in a T-shirt, and a VW bug full of ladies (one the bride) backing out of the lot.

My companion and I looked at each other and did the only  reasonable thing, we sat down to await other guests or at least the bride and groom.

After the DJ, the brother of a friend, finished setting up and testing his equipment, he came over to say, “Hello.” I asked if I had the wrong time because “I thought the wedding started at 1 pm.”

He said, “No, the time I had was correct “but, you know, Mexican time.”

I burst out laughing. It is one thing for me to think that, quite another for a Mexican to admit it.

Sure enough about 2:15 pm a few other guests (3 to be exact) wandered in and sat down (Whew! At least we won’t be the only ones here.)

And, about 2:30 the bride appeared with a large group of family and witnesses tagging along behind. They all sat down around a table with the local justice, answered all the legal questions, which 2 sets of parents and at least 4 witnesses on each side (some of whom had to be rounded up) affirmed. After they all signed their names (a process in itself), it was about 3 pm and more people had started to arrive.

The judge got up, asked the “Do you…”s and received the “I do”s and presented the bride and groom to the now modest sized crowd. 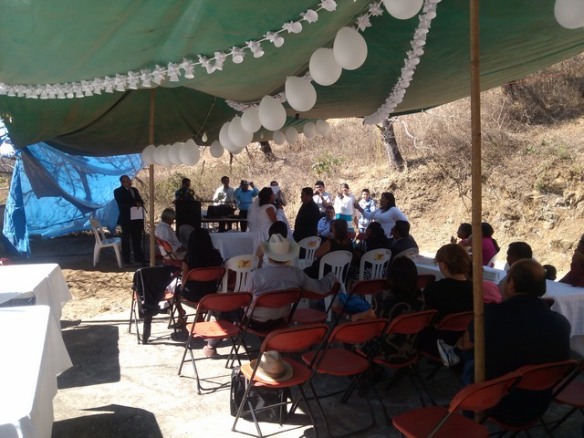 In Mexico, as in many countries, a religious ceremony does not qualify as legally binding, thus the couple is married by a civil magistrate at the courthouse or in person at the wedding site, and if they want a religious ceremony it follows or is held on a subsequent day. In this case, as the civil ceremony came to a close, the majority of the guests began to arrive to witness the religious ceremony. 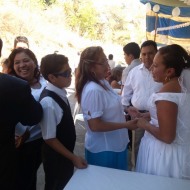 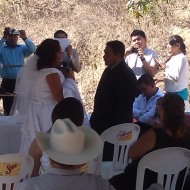 The rest of la boda was pretty similar to a wedding back home. The chairs were moved, tables set in place and everyone ate a typical meal of fire roasted pork, beans, a salad, and of course salsa (which was homemade, fresh, and particularly yummy), along with wedding cake. After everyone ate their fill, the tables and chairs were moved to the sides to be ready for the dancing to begin.

But before anyone danced, the groom sang a love song to his bride. A very sweet touch.

They of course danced the first dance, their children joined them, then family and friends. 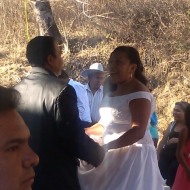 I had to leave early for an English class in town (this was a Monday after all) just as the party was really getting started. One thing I can say — Mexicans may start late but they love to dance and the party lasts and lasts. 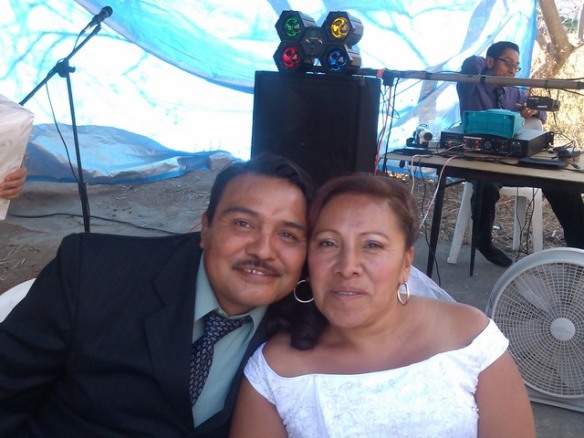