In Mexico, Christmas Eve and Day are a time for family. Since the whole country has at least two weeks if not a month off school and work this time of year, the whole family comes from far and wide to gather around the dinner table on Christmas Eve and share Christmas Day together, for the most part quietly. The children may receive a small gift or two, mostly from visiting relatives, but Three Kings Day (January 6) is the big gift day for them.

Called Epiphany elsewhere, this is the close of the Feliz Navidad season that began on December 12 with the Festival of Guadalupe. The tradition holds that this is the day (12 days after Christmas) that the three kings (wise men or magi) arrived to present gifts to the infant Jesus.

So,imitating the gift giving of the three kings, Mexican parents present gifts to their children (and each other) on this day. The night before, children set out their shoes and in the morning they are filled with small gifts, (The children of Latin America, as well as Spain, receive their gifts from the three kings rather than from Santa Claus) though now days the gifts may appear under a Christmas tree.

It is interesting that in other parts of Europe (Russia and other Orthodox lands for example) that Father Christmas comes on January 6; that date having something to do with the change to the Julian calendar.

Three Kings Day is celebrated with the eating of a special bread, Rosca de Reyes (wreath of the kings). Baked as an oval, the loaf represents a crown and is decorated with colorful dried fruits and candies to symbolize jewels. 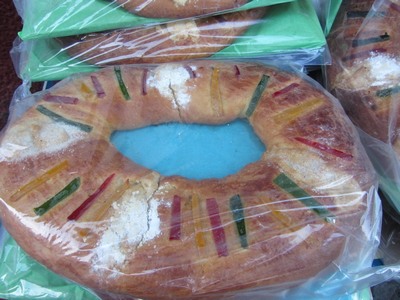 A doll figure is hidden inside, representing hiding Jesus from King Herod’s troops. (You might recognize this tradition as part of Mardi Gras celebrations when kings cake is served.)The person who gets the slice with the doll inside must host a party on the dia de candelaria (day of the candles or candle mass) on February 2. (More on that in February.)

Another Mexican tradition was also upheld, as I was awakened at midnight by firecrakers and cherry bombs going off in the callejon (alley) behind my house.