Living in the United States, there are many things we take for granted. Things like a refrigerator and stove in the kitchen, electricity at the flip of a switch, garbage collection on the same day every week, hot water flowing from the tap, or even running water itself.  Those things may be common in a country like ours but in most of the world they are not.

Here in Mexico, life is a little more like camping, even inside the house. Most places do not have hot water. If you need hot water for something, you heat it on the stove or grab a bucket and put an electric heating element in it until the water reaches the desired temperature. Then you take the bucket into the shower, and using a smaller container, mix it with cold water, slosh it over yourself, suds up, and slosh some more to rinse. (It is really pretty efficient — you can wash your hair, body, and underwear all in one fell swoop with one bucket.)

Of course, you could take an ice cold shower if you prefer; many people do.

You may have a refrigerator or you may not; if not, you go to the market more often and make foods that do not require refrigeration of leftovers (one reason I think salsa is a staple here.) You may have a stove with an oven even, or you may have the equivalent of a camping stove – 2 burners that run on propane. You buy drinking water in 5 gallon jugs at the local shop around the corner or from delivery trucks. Wash water is a hit or miss affair, however; it comes from the government, neighborhood by neighborhood on some schedule that only they know. To make sure they do not run out (at least hopefully) every house has a tank or two on the roof, so when “the water is falling” they can capture as much as possible to use until the next time their neighborhood is blessed. Many people also install a cistern in their house to store even more water. (I am not sure if, in true cistern fashion, they collect rainwater as well or if this is just an extra collection vat.) Trash collection is dependent upon when the truck goes by, and if you miss it…. 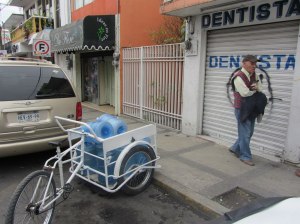 Everything here is delivered or hauled away by trucks, bicycle, or pushcart, and each has its own sound so the residents know who/what is coming down the street. It is quite a concert, though admittedly not particularly melodious. Water is announced with a loud, “Agua. Aqua.” The trash collector drives through the neighborhood ringing its bell and shouting “Basura!”on a recorded message over and over until it drives you crazy (but hey, you are not likely to miss them.) When you hear the bell, you take your trash out to the truck (or mule cart in some places) in whatever container you happen to have, and for 5 pesos (about 50 cents) they dump it in their truck and take it away somewhere. (A good deal considering that toilet paper cannot be flushed and there is a lot of human waste in those containers.) Propane is always delivered by truck (reasonable since even an empty tank is heavy). Crews drive around and around each block, filling the air with the scent of propane while honking the horn in 20-30 second increments, followed by the guy in back with the gas tanks yelling, “GAS!” If no takers, they continue up and down each street, repeating the honking/yelling routine, until they find buyers and the truck is empty. If someone hollers out that they want gas, the truck stops right in the middle of the street and traffic does not move until the full tank is off the truck, rolled into the receiving location, and the old tank rolled out and reloaded on the truck; impatient cars and combi drivers usually honking a not so subtle brass (horn) concert the whole while.

Now Irma is a classy lady, she has lived here for 50+ years and has all the vendors trained to come to her; water is delivered on Tuesday, trash is taken away on Thursday, and gas comes when she calls. All her needs are cared for like clockwork, well almost.  Though she has a cistern and a tank for water on her roof, even she is at the mercy of the city as to when the “water falls.” She lives in an area of more well-to-do residents, tourist shops, and hotels, where water for those tourists should be available but whether due to the holidays, the extra vacationers in town, or some other reason, water “hasn’t fallen in a month” and we are running out.

This being a large, four story house, my “penthouse in the sky” runs on a different water source (the tank)  than the rest of the house (the cistern.) The result is that Irma may have water in the kitchen but upstairs, where I stay, there may be none.. And that is exactly what happened on Christmas — the tank ran low so I did not have enough water to run the water heater (another rarity for Mexican households). “No problema,” I think, I can take a bucket shower using the cistern water, but no, the cistern is too low to provide water to the upstairs also.  So for 5 days now I have been going down to the ground floor, heating a pot of water to near boiling and carrying it up three flights of stairs (the last one, a wrought iron spiral staircase is the tricky one) in order to have hot water (or any water at all) to wash with.

This morning I awoke to the sound of water falling — and what a glorious sound that is. Ah, the little things we take for granted.